Forty years ago, a spark from a passing train (or so people conjecture) fell into the oil slick and debris floating atop the Cuyahoga River, causing it to catch fire.  The river fire of June 22, 1969 was not as serious as the ones in 1936 or 1952—it took less than 30 minutes to put out—but news of the aquatic flames was enough to seize the attention of the nation.

This year has been dubbed “The Year of the River” in honor of the 40th anniversary of the Cuyahoga’s time in the limelight.  Although burning rivers were relatively common in industrialized areas throughout the late 19th and early 20th centuries, it seems as though the 1969 Cuyahoga fire occurred at exactly the right time to catalyze public outrage and federal legislation for what eventually would become the Clean Water Act of 1972.

Although our burning river has been attributed with being an important event in raising public awareness about environmental issues in the United States, perhaps this particular fire (as opposed to the countless other river fires in various locations) became a national rallying point because awareness had already been rising.  Most likely a combination of both, the Cuyahoga became a symbol for the environmental movement along with Apollo 8’s “Earthrise” photos.  A year later in 1970, the first nationally-celebrated Earth Day took place.

The repercussions of the Cuyahoga’s infamy, however, continue to have significance in Cleveland.  In August of 1969, Time Magazine published an article that announced:

Some river! Chocolate-brown, oily, bubbling with subsurface gases, it oozes rather than flows. “Anyone who falls into the Cuyahoga does not drown,” Cleveland’s citizens joke grimly. “He decays.”

Other national media outlets picked up on the story of Cleveland’s industrial debacle, but perhaps the most remembered is Randy Newman’s song “Burn On”.

The publicity clearly embarrassed local government officials.  The Mayor of Cleveland at the time, Carl Stokes, noted, “What a terrible reflection on our city.”  Despite the fact that rivers and harbors had burned in Michigan, New York, Maryland, and Pennsylvania, among other states, Cleveland became the brunt of national mockery.

Quite a bit has changed since 1969.  While at the time the Federal Water Pollution Control Administration concluded that there was no visible life in the lower Cuyahoga, now its once equally polluted depository—Lake Erie—supports a $600 million fishing industry and 143 different species of fish have been identified in its watershed.  The Ohio EPA considers the final forty miles of the Cuyahoga a “recovering system” and the Cuyahoga River Remedial Action Plan (RAP) continues to promote the renovation and preservation of the Cuyahoga River and its tributaries. 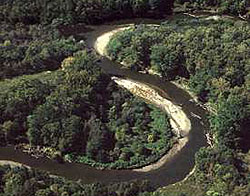 Cleveland is now penning its new story.  Citizens of Cleveland have grown tired of the “burning river” reputation and are now adopting the terminology of Green City Blue Lake, a local non-profit directed by David Beach in collaboration with the Cleveland Museum of Natural History.  Initiatives to make Cleveland a more sustainable city and to clean its water sources increasingly build upon local pride.

The Southwestern request to divert water from the Great Lakes to supply for survival in deserts has put in relief for many Midwesterners the importance of protecting one of our most precious assets.  Among many other positive attributes, the Great Lakes Compact and the mounting public comprehension that fresh water is a valuable (and limited) resource have made Cleveland a more attractive city to live and work in.

Cleveland’s connections to water continue to be a vital life source for the region.  After all, cities were founded by water supplies for a reason.

(I originally wrote this article for the BrownFlynn blog)

2 thoughts on “Year of the River”